An Exploration of Outer Space 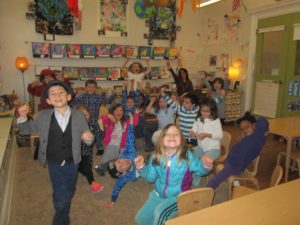 This year, my kindergarten class, Gan Anavim, undertook an in-depth and exciting exploration of outer space and the Solar System in ways that reflected the Reggio Emilia philosophy that inspires our school. The investigation provided opportunities for collaboration between the students and teachers as we co-constructed our knowledge about different aspects of space in a cross-curricular study. Together we researched answers to questions the children brought up such as, “What is a blue star?” and “What is the biggest star?” and “Why does Pluto have three moons when our planet is bigger and only has one?” It was a learning process that involved reference books some of the time and online research most of time. As the children discovered, many children’s books about space are out of date as new knowledge is being shared by scientists all the time. The children grew used to me saying, “I saw something new about space last night!” and they listened intently to articles such as plans to use 3D printers in future moon colonies to build houses, to news about spacecraft approaching planets, and the delivery of an espresso machine to the International Space Station. The children often called books “old fashioned” if they didn’t have up-to-date knowledge. They showed a genuine curiosity about the topic and stayed with it for the entire year with not only enthusiasm but thoughtful questions as well.

Our exploration of the Solar System began when Jonah asked if we could study volcanoes. While this would have been interesting in itself, I decided to guide the students to another focus first. I thought it was important for them to have an understanding of the Earth itself in order to have knowledge that would back up an understanding of volcanoes. The guidance of the teacher is an important part of the Reggio philosophy as s/he helps the children to find deeper meaning in their learning. The children and I worked together to learn about the Earth’s water and land forms by examining maps and a variety of globes, both political and topographical. We also studied the Earth’s internal structure. The children worked collaboratively to represent the Earth in different projects, using markers, collage materials, paper-mâché and even a pumpkin. As they did so, they learned the names of the continents and oceans, found out about the equator, and investigated the climates in different regions of the world. Along the way, they learned a song about the continents and made paper kippot that looked like globes.

Our study of Earth included a discussion about its place in outer space and the children began to incorporate aspects of space in their artwork as their understanding grew. After hanging the paper-mâché Earth from the ceiling, Adin exclaimed, “We could make a whole Solar System in our classroom!” The other children were equally inspired and so began a project to create the seven other planets, the Sun, The International Space Station, with an espresso machine. Exploring a map of the world. A pumpkin becomes a globe. the Moon and eventually three dwarf planets, with the challenge that they represent each using different materials and techniques including sewing, wire work, bead work, painting, repurposed objects and much more. The children looked to satellite images to get an idea about what the planets looked like, but interpreted them in their own way for their final designs. The mathematical concept of scale was introduced so that the children could understand the size of the room we would need to be able to create an accurate model. They soon realized that our room was not big enough and so they would not worry about size.

The work of the children was enhanced through knowledge the gained on field trips to a Rock Creek Park Planetarium and to the Smithsonian National Air & Space Museum. At the Air & Space Museum, they saw the IMAX movie about the repair of the Hubble Telescope. Before our field trip, the children had made an Orion rocket out of heating duct tubing and gold foil. After seeing the movie, the children turned the Orion into a Hubble Telescope complete with Space Shuttle and docking arm. Their joy in discovering new topics about space propelled them to want to investigate galaxies, black holes, space exploration and the International Space Station. They tackled each topic with a desire to learn more and to represent their learning in different ways whether it was through writing, drawing, or building. When visitors came to the classroom, they excitedly shared, not only their projects which were displayed on the walls, ceiling, and shelves, but the thinking behind them. Recently, the children shared their work with a guest and pointed out their model of the ISS that they built out of recycled materials. Sanchi said, “That’s the ISS we made. See the espresso maker on it? That was my idea to add it because the real one has one!”

A high point of the year came in March when we submitted questions for astronauts to WTOP’s Space Blog. Two of our questions were selected, and were asked to real astronauts on the International Space Station on a live broadcast! The questions that the astronauts answered were “How beautiful are the galaxies?” which Noam asked, and “How long does it take to become an astronaut?” which was from Dvir. When we heard our questions read, the whole class celebrated!

As an end of the year project, we created an alphabet book about outer space. After brainstorming a list of space-related words for each letter of the alphabet, the children each chose a letter and created projects for their words. The finished projects were then photographed and combined into a book as a memento of Gan Anavim’s educational journey on space. The range of words reflected the wide range of learning that took place over the year with words such as astronaut, launch, quasar, and yellow dwarf.

Throughout the project, the students demonstrated their curiosity, eagerness to learn, enthusiasm, and creativity. Together, we made the solar system (and the whole galaxy) come alive in our classroom. Not only were the children inspired by our learning, but I was too. The phrase “teacher as researcher” often comes up in writings about the Reggio approach. This year I learned just as much as my students and became just as excited about our discoveries.