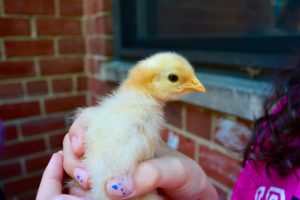 At the beginning of the semester, the fourth grade Explorers class raised the idea of getting a class pet. It was decided that students needed to earn it, so their teacher created a chart where they earned points for doing and acting in ways that showed responsibility. By the end of April, they had earned enough points! The class started a discussion about which pet to get. They created a document with questions about different class pets, how to get them, and how to take care of them. Some suggestions were a bunny, a hamster, or baby chicks. The final choice came down to baby chicks or fish, and the baby chicks won!

Everyone was super excited for the baby chicks to come. On May 18, at 10:30, the chicks came. Along with a cage of two, week-old chicks, there were seven eggs in an incubator which were supposed to hatch four weeks later. Avital Pinsky noted, “an incubator takes the place of a chicken by keeping the eggs warm.” The fourth grade started learning about the growing process in science and social studies. “It is really interesting to learn about the parts of the egg” said Zoe Kaiser-Blueth. The whole fourth grade then decided that the names were Hubba Bubba, and McChickypants.

Four weeks later on June seventh, one of the eggs hatched. “It was ADORABLE,” said Hannah May. Six more eggs hatched within days, and the Explorers classroom became pure joy. This awesome experience was made possible by RentACoop.