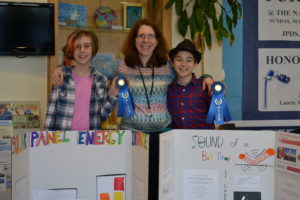 Two JPDS-NC sixth grade students and two alumni students were awarded first-place ribbons and special prizes at the DC STEM Fair. The DC STEM Fair is the premier science event for students in grades 6 to 12 who attend independent and public schools in the nation’s capital. Sixth graders Gabriel B. and Yael N. earned first-place ribbons for their projects in the respective categories of Physics and Energy. We also want to congratulate Lincoln A., Jennifer N., and Tamar P. whose inquiry projects were selected by the fair for competition in the categories of Chemistry and Physics. And kudos to Jonah D-L. (class of ’14), who won first in his category along with three special awards, and to Sam L. (class of ’13), who placed first in category, won five special awards, and placed 3rd for the Senior Grand Prize.

Each year, JPDS-NC Sixth Graders design inquiry projects to test a question of their choice. They are encouraged to find a testable question and design an experiment with measurable results. Their work focuses on noticing cause-and-effect relationships in the physical world. The students most often design experiments to test the incremental change of one variable that they change (the independent variable), one variable that they measure (the dependent variable), and many other variables that they control. The Sixth Graders learn to conduct experiments with multiple trials, and work to design precise measuring techniques and eliminate as much human error as possible.

Throughout the process, they often encounter challenges that require them to rethink, redesign, and retest. In this way, the inquiry projects highlight the students’ critical thinking, perseverance, and problem-solving skills, in addition to helping them better understand the world.
STEM education is flourishing at JPDS-NC. Stay tuned for future articles about our “Innovation in Action” Workshops for Teachers in partnership with Kiddovate, and our participation in the RAVSAK-Technion Design Challenge, a design competition that invited students to design, build, test, and videotape the process of creating a Pesach-themed Rube Goldberg machine.